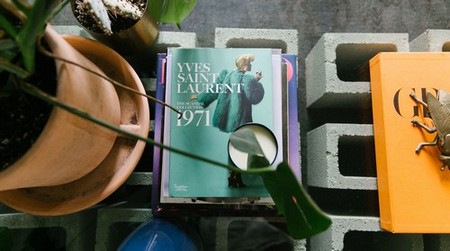 Location is everything – until you see the prices and diminutive sizes in your dream neighborhood. Matthew Herman and David Kien encountered this very relatable situation a few years back when they went looking for a new home in the Echo Park and Silver Lake enclaves of Los Angeles. What they needed was space. The house would have to act as a home for the couple, yes, but also as an office and production facility for their budding candle brand, Boy Smells. After a few months of looking, the pair broadened their search to Pico-Union, a less trendy but highly convenient neighborhood just west of Downtown. There, they spotted a 2,100-square-foot house owned by a pastor and his wife, who held church services in the living room.

The walls were painted lavender, green carpeting ran wall-to-wall, and the kitchen was retro pink – but they bought it. Matthew and David had backgrounds in fashion and design, and they saw potential underneath the scruff (up came the carpet to reveal solid wood floors). Read on to see how they decorated it on a dime, then check out the full work-live space on One More Thing, a blog from the founders of Of a Kind. (Spoiler alert: Their candle company totally took off – thanks to beauties like this “copper, rust, moss, saffron, and plug tobacco”–scented candle of theirs called Coin.)

Don’t Give Up on a Damaged Piece: One might think of reupholstering an old sofa, but there are other ways to update it even more. “This is a CB2 couch we reupholstered and added new legs to after our dog ruined it,” the pair explains. Sally, the culprit, is one of three canine roommates.

DIY with What You’ve Got: An open living area contains both the sofa and breakfast nook, the coffee and dining tables sharing a history. “We took the long, rectangular glass piece from this marble bottom and simply slipped it over cinder blocks for a low coffee table that fits perfectly in front of our green couch,” says David.

Curbside Finds for the Win: The marble base in question was left without a topper. “One day, I was walking the dogs in the neighborhood, and someone had magically left behind a gigantic glass table top,” David recalls. “I ran home, drove over, and shoved it in my car. Laid on top of the marble, it was another example of how this was meant to be.”

Consider Living With It Before You Renovate: “The house was originally from 1909, but it’s really an amalgamation of ’20s, ’60s, ’70s, ’80s, and ’90s all rolled into one,” David explains. A pink kitchen turned out to be the same color as their candle labels, so they kept it as it was (and painted a connecting room Farrow & Ball’s Calamine Pink to complement).

Forget How the Building Was Used Before: The listing advertised four bedrooms, but one was so small they took off the doors and turned it into “our development and smell station.” All business for Boy Smells is conducted on the ground floor, while they work and live upstairs.

Embrace the Retro Bits: The previous owners had so much stuff that you couldn’t even see this marble fireplace before they moved in, but the ’80s design ultimately suited their tastes.

Don’t Be Afraid of Temporary Fixes: A sticky-paper wall calendar was sourced from Poketo, a Boy Smells stockist. “We’re both in love with their stationery and calendars,” David says. “The calendar is updated every week during our staff meetings, with different colored Post-it notes used for each department’s milestones and deadlines.”

Never Underestimate the Power of Paint: Besides painting walls pink and white, the couple opted for a semigloss finish on the crown moldings to make them pop.

Also: Dark Paint! “I wanted the study to be more serious and concentrated,” David says. “We saw a photo of Samantha Boardman and Aby Rosen’s study in a magazine and were inspired to paint ours a similarly dark color.”

Match Your Shelving Unit to the Wall Paint: To make a small room – or a room with a bunch of stuff in it – look less cluttered, paint one or some of the furnishings the same color as the walls.

Yes to Terra-Cotta – but in Interesting Shapes: To offset all the pink inside, the pair opted for bowl-like and cylindrical terra-cotta pots on the patio.

Tour the rest of Matthew and David’s home studio at One More Thing, a blog from the founders of Of a Kind.