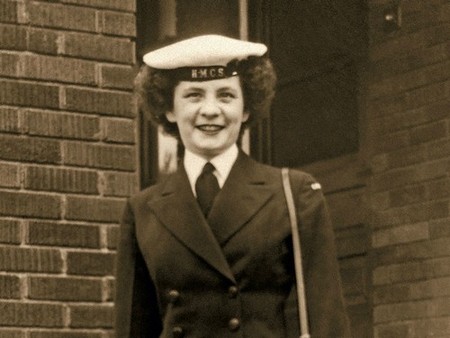 Helen was born in St. Catharines, Ont., on July 5, 1925. She joined the Women’s Royal Canadian Naval Service in 1943, and served as a switchboard operator. She was posted to the HMCS Discovery in Vancouver, Montreal, Halifax and Shelburne, N.S.

“We were trained to do the land jobs, so that the sailors, the men, could go to sea. The WRENS were essential… When I was in Shelburne (after) the war was over and they were decommissioning ships, we answered the phones and directed communications. There was lots going on.”

Helen was discharged in 1945. She and her husband, Jack, now live in Chatham, Ont.

Check out Veterans Voices of Canada for more profiles.

Find out how one couple escaped from East Germany and found freedom in Canada.

I spent a long weekend in Paradise Bay